Dear friends,
We just visited an extremely poor family. They live only 19 km from where we live and its almost unreal, that someone can live in such poor conditions.

Our pastor told us about this family and asked us if we could go out there to visit them in the hope that we could help them. It’s a family with 7 children.
The oldest is not in the picture as he is living with another family and is in secondary school. The youngest is a baby only 3 weeks old. 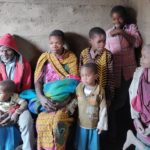 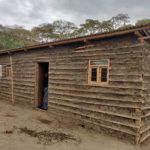 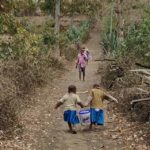 Some of the other Christian church members had collected money for the family so that they could get a better place to live (dirt house). They moved into the new house a week ago.

The week before they moved into the house something horrible happened. A hug snake had come into the hut and it sat up in the ceiling and climbed down on the floor when the man tried to hit it. On the floor all the children lay sleeping so the man was yelling and woke the children and got them out of the house so he could kill the snake. It was a very traumatic experience for the family. Their old hut was so leaky that it was easy for the snake and other things to come inside.

Look at their toilet which also is used for taking a shower (if they even get showers). Especially the boys were so ash grey as it is so dry in the area and the soil is like powder and it there is dust everywhere. 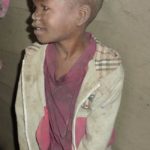 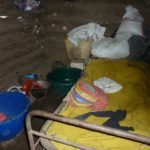 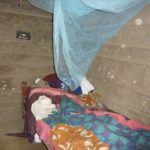 They had no furniture at all only 4 buckets we could sit on. That is all the furniture they had in their living room.
They had a narrow bed in each of the 2 rooms. The father slept with the boys in the same bed and the mother with the girls. There was no mattress in the beds, so they were lying directly on the springs. 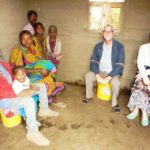 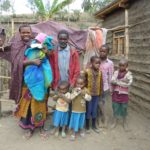 The man was so quiet and said almost nothing. We thought in the beginning that something was wrong with him, but we now think it was more of a depression.
But when the man saw what we had in the car he perked up and started to talk. We had 100kg of maize with us in the car and rice, sugar and beans. They couldn´t believe their eyes when they say all that food.

Even the little kids helped carry. We could not drive to the hut, so we had to park a way away and walk the rest.
When we came up to the hut again the boys were quick to find firewood because it was time to cook food on the open fire. It was so evident to see how hungry they were. Water they didn´t have either and had to walk quite a way to get it. 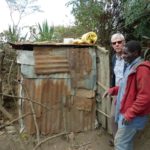 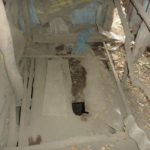 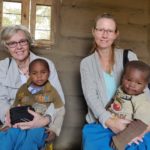 This is a family we would like to help.
We were very touched by their situation and hope that together we can give them a lift to move on.

If anyone would like to help us again you can send the money to our missions account in Denmark.

Please send me an email if you want to support the project “poor family”!