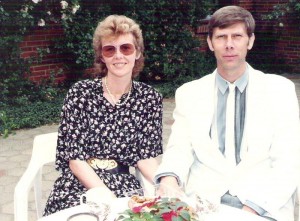 I (Tabitha) grew up in Christian home and attended Sunday school and Sunday services with my parents. I am number three in a family of four brothers and sisters.

At the age of ten I attended a service with a missionary from Tanzania. She shared about her work amongst children and women. As she was talking, I suddenly sensed a voice  whispering in my ear, “Some day you, Tabitha, will be helping the children in Tanzania.” Immediately, a different voice said, “God does not speak to children.”

In my adulthood, I have experienced that when the Lord speaks, it will always be followed by a negative reaction; this way you know that the Lord has spoken. The negative voice comes from our enemy.

I clearly remember that I did not dare to share this incident with anyone, not even my best friend, nor my parents. I saved it in my heart, where it remained for many years.

Torkild was raised in an ordinary home, where they were christened as infants and confirmed, and that was it. Torkild is the youngest of four brothers and sisters.

Torkild and I attended the same school from the first grade. I was madly in love with him when we went to school. He was the funny boy in the school, filled with all kinds of ideas.

When I attended the fourth grade I started praying for Torkild, saying, “Dear Lord, if Torkild wants to be my husband some day, you need to make him receive Jesus as his saviour. My mother always taught me that we could ask anything from God, and if the request was for our good, He would answer.

As I finished the seventh grade going on to the eighth grade, we had eyes for each other, although we were still very young. I made it very clear to him: if he did not want to be a Christian, our relationship could never become a reality. I was a believer and had decided that my decision was for a lifetime.

I had never told Torkild about my calling as a child. Often, when we attended church meetings, especially with missionaries, it was as if something was burning inside of me.

I often knelt by my bed, saying, “Lord, if you are serious about my calling, you have to tell Torkild, so that one day he will ask me if I am willing to be a missionary.

Several years went by and we had three wonderful children. They attended a private independent school, and we had a successful haulage business. In every way we had a good life in Denmark.

Because of very long working hours Torkild never attended prayer meetings, since these were always held on mid-week evenings. But then due to a sudden strike in Denmark, Torkild got a chance to go. That night a very special thing happened, which changed our lives for ever. This meeting was very different from other meetings. Normally, it would start with praise and worship, but that night nobody was singing, nobody was talking.

Suddenly, someone stood up and prophesied, “There is someone here tonight, whom the Lord wants to use in ministry. The doors are open and I will prepare everything for you. The work is urgent, and if you are not willing to go, I will have to send somebody else.”

Torkild whispered to me, “How are you feeling?” I was unable to answer – but was thinking that it was a good thing we were sitting down, because my legs felt like gel and I sensed they could not carry me.

As we drove home that night, we discussed what happened and suddenly I heard the Lord saying, “Now you can tell Torkild about your calling as a little girl.”

That night we accepted the call of God.

After a few days we decided to go and tell our pastor. He answered, “We have known this for a long time. We just waiting for you to come and tell us.”

Then we invited my parents (Tabitha’s) to our house to inform them about our decision. My mother started weeping, and I thought, “Is it really that hard on her..”

My mother said to my father, “Do you remember the incident when the children were small?” At that time we had meetings in different people´s living rooms, and one day an unknown preacher came to out house and told my parents, “One day, one of your children will become a missionary.”
My mother had four children and did not know who of them it was for, and she decided to save the words in her heart. Thus, the Lord confirmed my calling through revealing it to my parents ahead of time.

That is our Father God, and He works in mysterious ways!