A big loss for us and for Tanzania

During the week when Torkild was away something happened that shook us deeply.

Our German friends and neighbors, Friedhelm and Rosy fell ill (you probably remember that we wrote about Friedhelm many times. He built several churches with the help of Torkild in large parts of Tanzania). Rosy wrote to us to hear how we were doing because they had gotten a temperature and felt bad. Their maid was very ill with covid-19. Seemingly, she had passed it on to Friedhelm and Rosy.

I immediately suggested that they saw a doctor, but Rosy said Friedhelm was so sick that he could not sit in a car to get to the doctor. Finally, the doctor instead came to their house. Friedhelm was admitted to a missionary hospital approx. 150 km from Arusha with doctors from the West.

The day after Torkild’s return Rosy called and said that Friedhelm’s condition had worsened. Possibly he would be taken by plane to a hospital in Dar es Salaam or Nairobi. She had forgotten their passports so Torkild decided to take the passports to the hospital with our driver, Hilary to see if he could help.

In the meantime, the doctor had talked to Rosy and advised her not to move Friedhelm as his condition was extremely critical. The problem is that most Tanzanian hospitals do not have any respirators. And they needed one for Friedhelm.

At noon the following day after Torkild had arrived in the hospital, Friedhelm passed away, quietly and peacefully.

It was big a shock to his wife who had no relatives around her. She immediately began calling the children to inform them of their father’s passing.

The body had to be moved from the hospital before evening on the same day, as they have no cooling rooms. Hilary drove the body in Friedhelm’s car and Torkild took Rosy in our car. They drove to a hospital in Arusha where Friedhelm was put in a cooler.

Friedhelm had earlier expressed that he wanted to be buried in Tanzania. He received a truly royal funeral. He was buried at our FPCT church in Ngaramtoni, which is the local church that we work with.

He leaves behind his wife and four children. One of the sons came to be a part of the funeral. 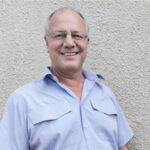 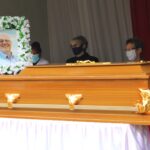 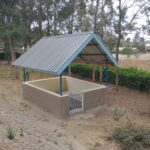