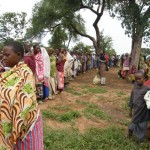 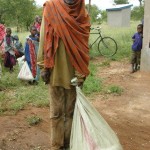 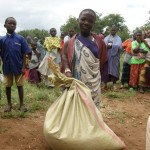 When we started distributing it was so dry that we were totally covered in dust from top to bottom. At least we could go home and bath and change clothes, but for those families it meant they had to live 24 hours with this every day.

At the end of November it started to rain and everybody got very busy planting maize and beans in the fields. But unfortunately the rain only lasted for a couple of weeks and the small plants couldn’t survive in the dry and the burning sun. In January they started planting again, since this usually is the rainy season, but once more it didn’t rain enough and the plants died again. The good news are, however, that it has rained most of April, and people have been able to plant 3 times. If it keeps raining to the end of June they’ll get a great harvest. God knows how important this is and we have therefore put it in his hands.

Last week Alex one of our Masai co-workers said: Mama if it doesn’t rain within the next 3 days the plants will die. He was very worried, so I said : Let’s pray , because I know God loves you people in Mswankini. And imagine it started to rain and kept raining for 3 days. Alex was very surprised that it only had rained in his area and had a hard time understanding this, but was very happy and believes that they’ll get a great harvest this year. But for me it wasn’t so surprising since I know that God can make it rain wherever he wants, and especially with all praying so hard for this. This just goes to prove that God listens to our prayers and answers although at times it seems long. But He never forgets you!

The 30th of April was the last day for our food distribution and it was an exciting day. Even though it was raining the people lined up happy to get food.. It was so touching. People had come from other areas far away to ask for food. So we decided to give them what was spilled on the floor, so not a single grain was lost. 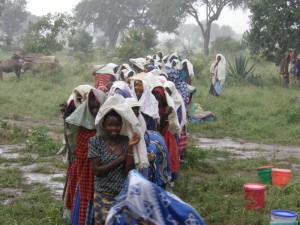 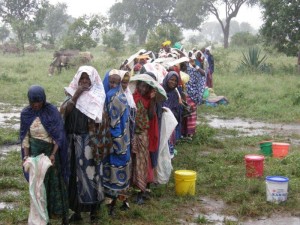 After the distribution was finished the people kept staying and I thought it might be because of the rain. But no, the chief was to hold a speech saying THANK YOU (His speech I’ll send to you later). Thanks to your generosity this has been possible. The women had sown a Masai dress and made earrings and necklace as well for me as a gift of thanks. I looked like a beautiful Masai bride , and they all laughed, cheered and made their special sound with their tongue out of happiness. It really touched me deeply. At the very end 3 of the oldest men came and prayed for Mswankini, rain and a good harvest. They also Thanked God for all of you and your help. It was so touching hearing their sincere prayers. They asked me to tell you when I come to Denmark not to forget the people of Mswankini in your prayers. 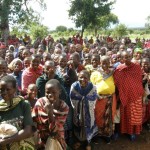 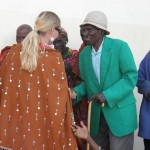