The story about Ingvar and his second hand shop in Rønne.

Ingvar Bay Mogensen makes each year DKK 120.000 or 20.000 dollars in his shop working 40-50 hours monthly.
This means DKK 430.000 or 70.000 dollars in 3 and a half years, which Ingvar has sent to Africa to help children to go to school.
The shop’s located in a small room in his house (23m2)
Ingvar makes about DKK 10.000 or 1.600 dollars regularly each month which is great for only being open one day a week on Thursdays from 4-6pm.
The reason for this is that he’s got a lot of regular customers coming back each week to see if there’s something new. 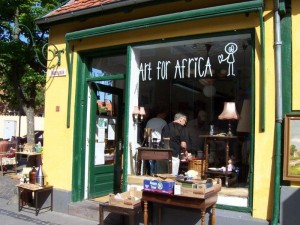 100 procent goes to Africa
Ingvar works at a Christian school as a janitor, so the work in the shop’s done in his spare time.
The work in the shop doesn’t only consists of selling, but Ingvar also has to go to peoples’ houses getting the things they want to get rid of , sort it out , and put price tags on.
On a sign in the shop you can read: 100 procent goes to Africa, and it really does!!
Since Ingvar pays for all expenses out of his own pocket.
I like to help my missionary friends Tabitha & Torkild Jensen in their work with schools and education for the children.
They’re doing a fantastic work with this in Arusha which is located in the Northern part of Tanzania.
Ingvar and his wife Ingelise are old friends of Tabitha and Torkild, and a couple of years back they visited them. It was on this trip, that Ingvar saw the great need there was to help the children. He therefore decided to back up his friends work.
They started with sponsoring 3 children. 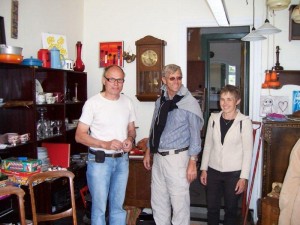 Helping more than 40 children in school
Ingvar will keep on doing this for as long as he can.
It costs DKK 2.760 or around 400 dollars to keep a child in one of Tabitha and Torkild’s boarding schools, which includes: food, boarding, clothes and school fees.
The earnings alone from Ingvar’s shop can help more than 40 kids each year.
The education, as Ingvar says, is the most important. It gives people a chance to better their lives and help their country developing.

Ingvar and his shop really makes a difference.