The small boy Lomani had a very beautiful funeral. 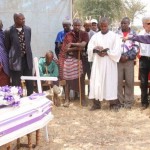 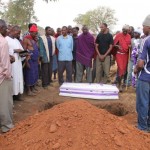 The pastor made a very good sermon saying that from today little Lomani is together with Jesus. No more pain, sorrow nor illness, but everlasting happiness and peace.

The little boy has been through so much pain because of his severe burnings, that it’s hard for anyone to imagine. But now he’s at peace.. 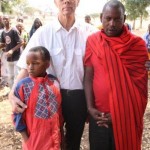 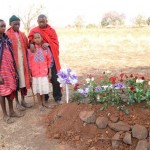 It was terribly hard for the father, sister and brother to say good-bye to him. The fact that the mother and the other daughter are still in the hospital made it even harder.

1. Picture: The beautifully decorated small coffin.
2. Picture: The people assisting at the funeral with the women standing in the back ground, which is a Masai tradition.
3. Picture: Torkild comforting them. The girl kept holding his hand during the funeral.
4. Picture: The father with his 2 children together with Lorikus’s own father.