”He who is kind to the poor widow lends to the LORD, and he will reward him for what he has done” Prov. 19:17

I admit that I am really sorry to send out a cry for help so soon again.
This time the problem is a poor widow whose husband died several years ago from a heart attack. He left behind his wife and five children. We have known the woman and the children for a few years.
Mama Oberline had a tragic accident. Recently, we have had some heavy showers and many places were flooded including this woman’s house.
On the first morning after the rainfall she wanted to make some tea for the children before they went off to school she wanted to take some firewood in order to light a fire in the fireplace that consisted of three stones. 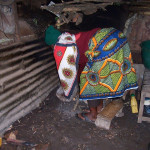 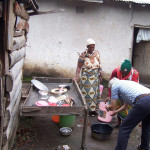 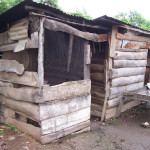 As she was reaching out for a piece of wood she discovered with terror that a big cobra had hidden in the stack of wood and before she had time to run away it had bitten her leg, which immediately began to swell. The cobra had probably crawled up in the wood due to the flood.
Mama Oberline cried for help and immediately a neighbor came running and tied something tight around her leg in order that the poison should not spread in the body. The neighbor quickly called for someone to transport her and she was taken by motorbike to the nearest minibus, which again took her to the hospital. As she reached the hospital, the poison had spread to the whole body and she was beginning to turn blind and on the verge of unconsciousness

Fortunately, the hospital had some serum against snake bites and they gave her some shots. As her situation was very critical and her life was in danger she stayed in the hospital for several days.
Unfortunately they did not manage to kill the snake and therefore they are afraid that it may return to the shed. 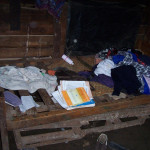 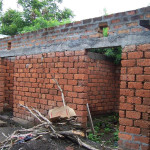 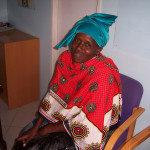 It is now a month ago and she has recovered reasonably after the incident. Her eyesight is slowly coming back, but the leg is still numb and therefore she is still unable to go to work. She used to be a day-laborer working in the fields, washing clothes or the like. These jobs have provided her with money for food.
The problem is that the children are afraid to sleep in the shed which is very leaky and therefore snakes can easily get in and hide.
We just went to see her and to inspect the situation. The shed is divided in two, partly kitchen and partly bedroom for the children.

Before the father passed away he had been building a small brick house with two rooms. For several years it has remained in the state as shown in the picture and we were surprised to see that the walls still look fine.
We very much would like to help this widow with five children aged 11-20 years.
We would like to help her finish the house so that the children may have a safe bedroom where they do not have to fear for any snakes. The costs to put on a roof, furbish the walls, lay a floor and put in doors and windows will amount to approx. DKK 15,000.

I just had to share this experience with you because I am burdened with the situation and wish for this poor widow and her children that they receive a safe place to sleep. At the moment, until a solution is found the children spend the nights at the neighbor’s house.
The oldest of the boys is a mechanic apprentice which takes three years. When he is finished it is our hope that he will get a good job and help take care of his mother. Two of the boys are in secondary school and the last one in elementary school.

I am sorry if you think that we beg too much, because we do not wish to do that. But our hearts really go out this poor family. Oftentimes we see that ’many a little makes a mickle’ and this would be the case here too.
If 15 people give 1,000 DKK or 30 give 500 DKK then the money is collected.